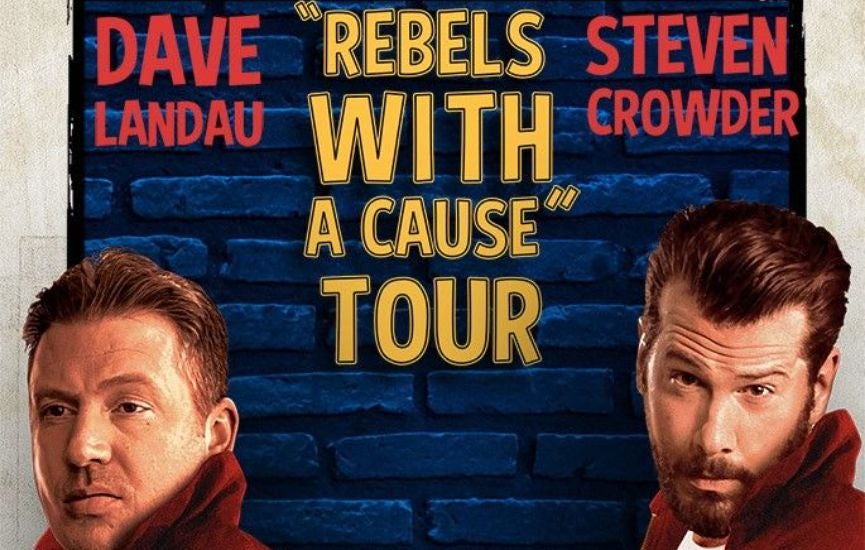 Rebels With A Cause Tour

Rebels With A Cause Tour

Rebels with a Cause Tour: Steven Crowder and Dave Landau

Coming off multiple sold-out stand-up dates this year, Steven Crowder (host of Louder with Crowder/comedian) and Dave Landau (nationally touring comedian/Louder with Crowder) are hitting the road with the “Rebels With a Cause Tour.” With their first stop in Phoenix, AZ at Arizona Federal Theatre on September 16th, special guests will also be on hand to entertain as they weave their way across the country. Other stops on the tour include Houston, West Virginia, Nashville, New Jersey, and Maryland. Please check venue websites for restrictions and requirements ahead of time. For more information visitwww.LouderWithCrowder.com/Tour

Host of the wildly successful conservative talk show, Louder with Crowder, Steven Crowder began his career in entertainment through acting and stand-up comedy. His brand of politically incorrect humor, from comedy clubs to the internet, went viral, solidifying him as one of the pioneer creators on YouTube. He has since appeared on Fox News, CNN, HLN, and more.

Louder with Crowder is now a growing brand, with shows Monday through Thursday on YouTube, The Blaze, and Rumble, and with news, merch, and more on their website, LouderWithCrowder.com. Steven’s videos and popular podcast/syndicated radio show has generated millions of views and downloads. Unrestrained by the shackles of traditional media, Steven Crowder’s unfiltered approach resonates with new audiences.

Getting his start in Detroit at the Second City’s Conservatory, Dave Landau has become one of the most in-demand headliners working today. As a top rising comic, Dave’s laid-back demeanor and dark style of comedy landed him on Comedy Central’s “This is Not Happening” and AXS.TV’s “Live at Gotham” 5 times. He was also a finalist on season 8 of “Last Comic Standing” on NBC.

Dave was brought in as 3rd mic on “The Artie Lange and Anthony Cumia Show.” When Lange departed, it became “The Anthony Cumia Show with Dave Landau,” where he co-hosted for two years. Dave is currently 3rd chair on one of the most popular conservative talk shows in the world, Louder with Crowder on The Blaze, and regularly performs at clubs and theaters throughout the country.